The concept of a Supernav is used heavily on the site. These are the larger bits of text and markup included in the main navigation drop downs. These are implemented as specially named Boxes. They are by convention named supernav-*, for example templates/downloads/supernav.html.

Here is an example of what that looks like on the site. 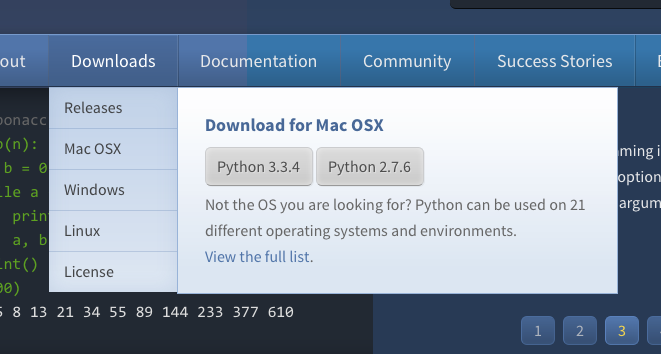 The sub-nav items on the left are simply nested Navigation links in SiteTree relative to the ‘Download’ item in the tree. The larger Download for Mac OSX box however is what we refer to as the supernav.

Most supernavs are updated automatically based on the underlying Django application content using signals. By convention the application will have a template named supernav.html. For example, upon saving any published Release a Django signal is fired to update the supernav-python-downloads box with the most current Python2 and Python3 releases. In this case the markup is structured in a way to allow for the automatic OS detection Javascript to show the user the appropriate download links for the OS they are browsing with.

Pages are individual entire pages of markup content. They are require Title, Path, and Content to be acceptable in the system. Note that Pages are implemented using a fall through system of URL routing so a user cannot override an existing defined Django URL on accident with a Page.

Pages are automatically purge from Fastly.com upon save.

Boxes are re-usable bits of HTML markup that are used throughout the site. Things like sidebar info and specific areas of areas of pages with a richer design (i.e. landing pages) that would be cumbersome to edit as one large content textarea.

There are special boxes that are automatically rebuilt using templates, see Supernavs.

The downloads app stores all of the structured data regarding Python releases. Each Release object has associated ReleaseFile objects that contain information on the various download formats Python.org supports.

If the version you are creating should be considered the “latest” release for the major version in question (Python 2.x.x, 3.x.x, etc) then check the ‘Is this the latest release’ checkbox. When the Release is saved, the previous version will be automatically demoted for you and the new version will be used prominently on the site. For example the download buttons and supernav links.

If you make a mistake here, no worries you can just check the box and save on ANY version and promote it to being the latest release.

To create a release you simply need to fill in the appropriate information. Currently if a Release has an associated Release Page the system redirects to that to accommodate legacy content, but if the Content field is filled they are taken to the Release Detail page which shows the content and lists all of the associated downloadable files.

Release Files have a checkbox named ‘Download button’ that determines which binary/source package download link to display for a given OS. This information is used by the OS detection JS on the site so pick the package in most widespread use. On Source distributions be sure to check the ‘Download button’ for the .tgz version for widest compatibility.

The jobs application is using to display Python jobs on the site. The data items should be fairly self explanatory. There are a couple of things to keep in mind. Logged in users of the site can submit jobs for review.

The Sponsors app is a place to store PSF Sponsors. Sponsors have to be associated to a Company model from the companies app. If they are marked as is_published they will be shown on the main sponsor page which is located at /sponsors/.

If a Sponsor is marked as featured they will be included in the sponsor rotation on the main PSF landing page. In the fourth “Sponsors” column.